Thanks to my lovely subscriber, kissingthecockroach, for her inspiration!

She read a previous post, The 12 Symptoms of Spiritual Awakening, and commented that she had problems with #9, A loss of interest in interpreting the actions of others.

You know what? I also have problems with this one. That got me thinking.

I make mental maps of other people. Since I can’t be them, I try to understand them. I want to put myself in their shoes, to see the world through their eyes, to understand what makes them tick. And I can’t do that entirely, although I have found this effort worthwhile because it helped me develop my compassion for others’ experiences of life.

I notice someone do or say something that’s puzzling to me, and I become aware there’s a hole in my map of them, or an error that needs to be corrected.

My mind comes up with an explanation: “Oh, they said that because they were feeling insecure.” Sometimes I ask myself, after observing some very puzzling new behavior, “What probably happened to them that would explain that behavior?” (I’ve gotten clairvoyant hits on another’s experience that made me wish I had never been curious.)

I imagine that other people do the same with me. In fact, I believe it’s very difficult for human beings not to do this with each other. People are weird sometimes—strange, puzzling, nonsensical, difficult. Map-making, or interpreting the actions of others, is a major hobby for a lot of people. We like explanations, reasons, causality. We like to peg people, typecast them, make them fit our maps.

It’s a good practice to keep your map loose, ready to be redrawn at any time. You can take it for granted that any map has holes in it, and shortcuts and inaccuracies. Else it wouldn’t be a map, it would actually be the person, impossible to carry around in your head.

Also, time is an illusion, a useful convention we’ve devised. There is no past or future, only the present. Does the past explain the present, which explains the future? Maybe it works in reverse. Who can really say? We make these maps to create a consensual reality, and it falls way short of the real thing.

Who really knows why anyone does anything? The simplest explanation I know of is to attribute it all to chi, life force, moving vital energy. That’s how their chi flows in the present moment. Perceive it with wonder.

The most playful way of understanding the puzzles of living with others is to make like the medieval mapmakers and fill in the blank spots with images of beasts such as sea monsters, unicorns, and cameleopards.

In case you were wondering, here’s what a cameleopard looks like: 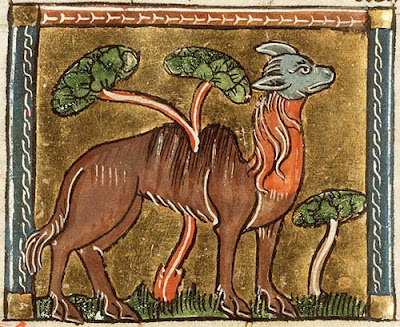 It makes me smile so much that just for the pure experience of more joy, when I don’t understand someone (or myself), instead of heavily puzzling on the reasons for their (my) behavior, I’m just going to attribute it to a cameleopard. Yes, a cameleopard made them (me) do it!