I just checked on my blog stats and noticed that someone in Sao Tome and Principe had looked at my blog yesterday. I had heard of it before and knew of it as a very tiny nation, but I wasn’t sure where it was.

I marvel at the reach of the Internet. Chances are I will never go there or meet someone in person from there, but there is now a connection between me, in Austin, Texas, USA, and some unknown person hailing from Sao Tome and Principe. Who could ever have guessed?

By hovering over the name, the map on the blog stats page showed that it’s a tiny island off the west coast of Africa. So of course I had to look up this exotic, enchanting place (where someone has read at least one of my blog posts!) in Wikipedia…

It’s actually a group of islands. Sao Tome and Principe are the two main islands formed from an extinct volcanic mountain range. (I bet the geology is fascinating. I love tropical volcanic islands.) This is the second-smallest African nation, after Seychelles.

The volcanic soil was good for growing sugar. Sadly, they imported slaves to work on the sugar plantations (not enchanting), but it became Africa’s largest exporter of sugar…until the Caribbean islands began outproducing it.

In the 19th century, coffee and cocoa were introduced. At one time it was the world’s largest producer of cocoa, still its most important crop. The landowners employed slaves, both legally and later illegally, and its history was marked by labor unrest and riots.

The islands became independent of Portugal in 1975 and is now a democracy. 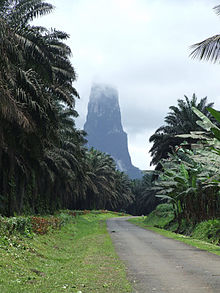 Anyway, these islands have mountains as high as 6,000 feet! Here’s a photo of one. Yes, it is exotic with fascinating geology! Also tropical, with the average temperature of 80 degrees F. and a rainy season.

About 164,000 people live there, including someone who read a blog post here! (Hello there!)

Demographically it is also fascinating. Populated by mixed blood descendants of the Portuguese colonists and African slaves, there is also a group said to descend from African slaves shipwrecked in 1540 (!) who earn their living from fishing, as well as descendants of freed slaves, contract laborers from the African mainland, Portuguese and Sephardic Jews, and Chinese.