A day after attending the Austin Fermentation Festival, where I sampled various kombuchas, krauts, a beet kvass, pickled veggies, mead, cider, raw milk cheese, and more, and thoroughly provided my gut with a wide array of probiotics, I am eating homemade natto for breakfast.

No one was selling or giving away samples of natto at the festival, which is a shame. Maybe that’s because, as one natto fan describes it, it’s like a vegan stinky cheese. I’ve heard some Japanese restaurants in the U.S. even seat natto eaters in a separate section! But I believe this crowd would have loved the opportunity to sample it and make up their own minds about it.

I got interested in making natto, a Japanese dish made of fermented soybeans, after learning it’s the highest known food source of Vitamin K2.You can also get K2 from Gouda and Brie cheeses, liver, egg yolks, butter/milk/meat from livestock eating green grass grown on good soil, fish eggs, and other sources.

I believe Vitamin K2 is the new Vitamin D, a substance that 15 years ago, most of us Americans were deficient in until people  began taking a supplement or getting enough sun.

No one knows how much Vitamin K2 people need, but even though it’s fat soluble, it doesn’t seem to have a toxic upper level as far as we know now. What is known is that it does something wondrous: it puts calcium where you want it, into your bones and teeth, and removes it from places where you don’t, like artery walls, kidney stones, bone spurs, joints, tendons, breasts, and brain. So natto/K2 would be good for preventing and relieving osteoporosis and cardiovascular disease.

It is also suspected of having benefits for aging, inflammation, rheumatoid arthritis, Parkinson’s disease, cancer prevention and relief, blood sugar regulation, and more. Research is ongoing. You can read more about the health benefits K2 here and here and here.

I wanted to try my hand at making natto at home. I bought a pound of dry, organic, non-GMO soybeans from the bulk section at Wheatsville. (Note: I am not a legume eater, but I have been assured by my nutritionist that fermented soy is much easier to digest and doesn’t have unwanted effects on the endocrine system that unfermented soy has.)

I needed natto starter, and after reading up on it, decided to get some pre-made natto. I figured it would be a good to idea to see if I found it tolerable to my tongue and get enough to use as a starter if indeed I did like it.

I found ready-made natto in Austin at Asahi Imports, a Japanese grocery in north Austin, in both the refrigerated case and the freezer case. I bought some of each. I ate some plain. It’s soft, cooked beans, coated with something that’s slimy and stringy — when you touch it with a fork, sticky stretchy strings adhere to the fork as you pull it away.

While I didn’t find natto delicious, it tasted okay to me. It has a mild bean-y taste and texture with sticky okra slime coating it. (That’s where the powerhouse Bacillus subtilis natto is found, and the source of the odor.) There are lots of ways to make it tasty: adding chopped scallions, kim chi, toasted sesame oil, mustard, wasabi, gluten-free tamari, gochujang, fish sauce, seaweed flakes, whatever strikes your fancy.

So…I soaked 4 cups of soybeans in three times as much water overnight. Then I put them into an 8-quart slow cooker, filling it two inches deep. I let them cook until soft but not mushy. You want them to remain intact.

I took a package of natto, dumped it into a bowl, added half a cup or so of hot water, stirred to mix well, and then dumped the bowl’s contents into the slow cooker with the soybeans and maybe a cup of the cooking liquid, stirring thoroughly to mix the natto starter evenly throughout the soybeans. At this point, it’s time to ferment the soybeans

So far, so good, but this first batch failed because I could not maintain the appropriate temperature range for fermenting. I turned the crockpot off while I went to work, and the temperature had dropped to 94 degrees F when I returned hours later. The Warm setting brought it up over 120 degrees. You want to keep it in the 100-113 degree range.

However, it perfumed my trailer with an odor similar to dirty socks, so it did ferment some. But when I tried it, it didn’t have sticky strings.

This is the big problem – how to keep the beans and natto culture between 100 and 113 degrees F. for 24 hours so the natto bacteria can grow and transform soybeans into a superfood? 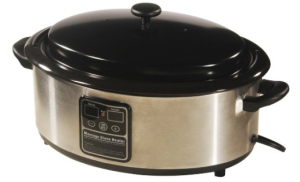 Well, as luck would have it, I had just bought an $80 hot stone heater for my practice. It’s built to heat stones quickly and then to maintain them in a temperature range appropriate for applying to skin. I read the instructions and discovered – YES! – that the lowest temperature setting was 105.

Best of all, it displays the desired temperature and actual temperature.

So I started over with new soybeans, and after they were soaked and cooked, I put them in the hot stone heater and set the desired temperature at 105. I put a piece of parchment paper on top of the beans. It was within one degree of 105 every time I looked.

This second time, something came up, and I let it ferment for too long, about 36 instead of 24 hours. I put it in the refrigerator for 12 hours before consuming. It had some stringiness and slime to it, but not as much stickiness as store-bought natto.

I ate it this morning for breakfast with chopped scallions, wheat-free tamari, my homemade kim chi, and a sprinkle of dried seaweed. My imagination is wondering how natto would fare in a breakfast taco.

3 thoughts on “Fermenting more stuff: I made natto at home!”