While continuing to learn more about fibromyalgia, I found something interesting: Frida Kahlo probably had it.

If you’re wondering what fibromyalgia is, the Mayo Clinic says it’s a disorder characterized by widespread musculoskeletal pain accompanied by fatigue, sleep, memory and mood issues. Symptoms sometimes begin after a trauma, surgery, infection, or significant stress. Women are much more likely to develop it.

One researcher, Manuel Martinez-lavin, says it’s likely the iconic Mexican artist Frida Kahlo had fibromyalgia. The bus accident that badly injured her at age 18 must have been quite traumatic and was followed by many stressful surgeries. The accident left her with chronic pain, well documented in her art.

I don’t believe the diagnosis of fibromyalgia existed in her lifetime (she died in 1954), but several of her self-portraits represent living with chronic pain.

Frida made art out of her pain, but not everyone has that option.

In the past couple of years, it’s becoming more accepted that fibromyalgia is a disorder of the autonomic nervous system, where the nervous system is stuck in sympathetic mode (fight or flight). There is a constant level of tension that causes the fascia — the web-like connective tissue that surrounds muscles, muscle fibers, and even muscle cells — to contract and become inflamed.

In a way, it’s similar to PTSD, only chronic stress rather than trauma may initiate it.

If you’ve ever had plantar fasciitis or tendinitis, imagine having it all over your body with no relief. That’s what it’s like to have fibromyalgia. 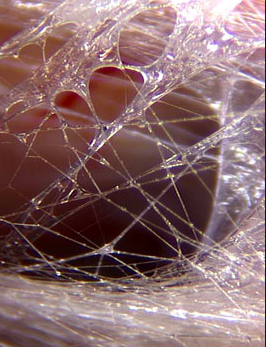 The focus on finding treatments that lessen the pain signals from the sympathetic nervous system and restore elasticity to the fascia is bearing fruit.

Researchers have studied the effects of different types of massage on people with fibromyalgia. They found that all styles of massage except Swedish had a lasting and positive effect on pain, but that the myofascial release technique (MFR) provided the most pain relief. In addition to short-term relief, with MFR, pain was reduced a month after a session and to a lesser extent six months later.

After the body begins to release its tension patterns, the autonomic nervous system starts to regain the ability to pendulate appropriately between the sympathetic and parasympathetic branches, greatly lowering pain signals and deepening the ability to relax that is so often absent in those living with chronic pain.

My source for this information is the January/February 2017 edition of Massage & Bodywork magazine. The lead article states that offering myofascial release along with techniques that calm the sympathetic nervous system (such as craniosacral therapy) would be most helpful.

I just so happen to offer both those techniques, and I have added 60-minute and 90-minute fibromyalgia sessions to my list of services. My website with online booking is  here.

I’m continuing to research non-pharmaceutical interventions for fibromyalgia. You can look forward to posts on Breathing Pattern Disorder and heart rate variability training as ways to swing the autonomic nervous system more into balance.